It’s been three months since I published my last reading list and I’m proud to say I read nine books. So far my total for the year is 32 books, which is already two more than last year. I think it’s realistic that I’ll read another two books before we close out 2020. That has to be a record for me!

Almost all of my reading is done at night. I usually have 20 minutes between Sybil and Lawson’s bedtime and spend it reading or scrolling Instagram. Then I’ll also read at least 30 minutes before my own bedtime, but sometimes stretch that to an hour or even more if I’m really into a book.

ONE // The Friend Zone by Abby Jimenez is the prequel to one of my favorite books of the year, The Happy Ever After Playlist. In The Friend Zone, while planning her best friend’s wedding, Kristen meets the best man, Josh. He’s funny, sexy and never offended by her sarcasm. The only catch is he wants a big family and she needs a hysterectomy to deal with her fibroids.

I thought this book would be a shoo-in since I liked the next book by the same author and suffered from fibroids. But, even though Josh was never offended by her sarcasm, I was. I found Kristen to be crude and couldn’t root for her.

TWO // Majesty: American Royals II by Katharine McGee is the second book in the American Royals series. I really like the premise of this series – what if George Washington had become King instead of the first President. In Majesty, Beatrice becomes the first Queen while America adjusts to the idea. There’s love in store for Princess Samantha and Daphne continues her scheming to rise from commoner to princess.

If you liked the first book, American Royals, I think you will enjoy this one.

THREE // In The Vanishing Half by Brit Bennett, twin sisters, inseparable as children, ultimately choose to live in two very different worlds as adults: one black and one white. The Vignes twin sisters grew up together in a small, southern black community. After running away at 16, it’s not just the shape of their daily lives that is different as adults, it’s everything: their families, their communities, their racial identities. Many years later, one sister lives with her black daughter in the same southern town she once tried to escape. The other secretly passes for white, and her white husband knows nothing of her past.

I found The Vanishing Half fascinating. Passing isn’t a term or practice I was even aware of before this book. I did have a harder time really getting into the characters. While I think it is a worthwhile read, I wanted to love it more than I did.

FOUR // The Seven Husbands of Evelyn Hugo by Taylor Jenkins Read is one of my favorite books I read this year. Actress Evelyn Hugo is finally ready to tell the truth about her glamorous and scandalous life. She chooses Monique, an unknown reporter, to write her memoir and they meet to go through her four decades of experiences. As Evelyn endears herself to Monique, it becomes clear that their lives intersect.

I’ve read another book by the same author (Daisy Jones and the Six), which I really enjoyed. This one didn’t disappoint. There were twists that I didn’t anticipate and a beautiful love story spanning most of Evelyn’s life.

FIVE // In a Holidaze by Christina Lauren follows Maelyn Jones as she relives the same holiday over and over. When we first meet Mae, she’s on her way to the Utah cabin where she’s spent every Christmas since she was born with two other families. She’s living with her parents,  hates her going-nowhere job, and has made a romantic error of epic proportions. Mae has to figure out how to break free of the time loop and finally get her true love under the mistletoe.

While Love and Other Words is by far my favorite Christina Lauren book, In a Holidaze is a cute holiday read, especially if you enjoy reading holiday themed books.

SIX // In Destination Wedding by Diksha Basu, Tina travels to India with her best friend and her family to attend the lavish wedding of her cousin. Tina wants to belong, but isn’t sure where – India or America?

Honestly, I didn’t love Destination Wedding when I was reading it. It wasn’t until I listened to the Bad on Paper book club episode, and bonus episode with the author, that I found myself nodding in agreement about several parts that I enjoyed, specifically a glimpse into an over the top Indian wedding and the romance between Tina’s father and a widow from India.

SEVEN // You Had Me at Hola by Alexis Daria is another Bad on Paper podcast book club pick. You Had Me at Hola is a rom-com set in the drama-filled world of telenovelas. The story follows soap opera star, Jasmine, and aging telenovela star, Ashton, as they meet to film a bilingual rom-com for a streaming service. Jasmine and Ashton agree to rehearse in private and one thing leads to another. While their on screen performance improves, the media drama threatens to destroy both of their plans.

This rom-com gets pretty steamy in parts. It’s one of the better rom-coms I’ve read this year so if you’re a fan of that genre, I’d definitely recommend it.

EIGHT // Royal Holiday by Jasmine Guillory is the 4th in a series, although it’s the first book I’ve read by the author. Vivian tags along on her daughter’s work trip to England to style a royal family member. She’s excited to spend the holidays with her daughter and taking in the British sights. What she doesn’t expect is to become attracted to the Queen’s private secretary.

This was my first read in the series, but it won’t be my last. It was refreshing to read a romance focused on the mother instead of her daughter.

NINE // Beneath a Scarlet Sky by Mark T. Sullivan is based on the true story of Pino Lello, an Italian teenager that wants nothing to do with the World War II or the Nazis. After his family home is destroyed by Allied bombs, he joins an underground railroad helping Jews escape over the Alps into Switzerland. Pino’s parents force him to enlist as a German soldier in an effort to protect him. He is then recruited to be the personal driver for one of the most powerful Nazi commanders in Italy. He risks his life to spy for the Allies inside the German High Command.

I wasn’t even halfway through Beneath a Scarlet Sky before adding it to the top 5 books I’ve read this year. It’s just behind The Nightingale and We Were the Lucky Ones as my favorite WWII historical fiction books.

A few books I have on my list to read next: The Twelve Dates of Christmas, This Time Next Year, Code Girls, The Last Train to London and A Promised Land. 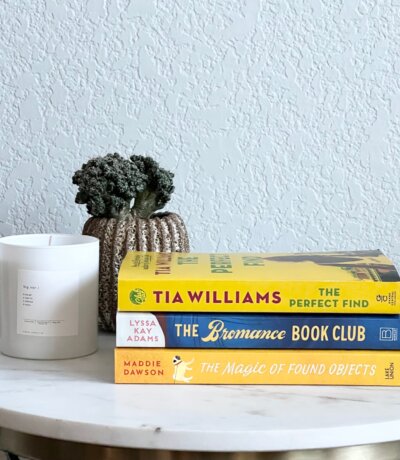