It’s Christmas weekend! Jim finished his fall term and is off until January 9th. Yesterday we drove to Phoenix to spend the holiday with his dad and family. We haven’t seen them in 5 months which seems strange after living so close for several years. Lawson was very excited to see his Aunt Kenzie!

Jim and I are taking advantage of staying with the grandparents to sneak out for a date tomorrow afternoon. When Sybil was born I gifted Jim a hot air balloon tour followed by dinner in the desert. We never got a chance to do it before we moved. I’m super excited (and a little scared too)!

Since he’s been off of school, Jim is spending lots of time with Lawson and Sybil. They love having him around and it’s such fun for me to watch them interact. He’s definitely the creative and fun parent. It’s been a good reminder for me to slow down and play. Nothing good happens when I’m trying to do 10 things at once.

Earlier this week I got my hair cut and colored for the first time in six months. It’s amazing how a little refresh can make you feel so much better. I also flew to Phoenix on a solo trip. It was only the second time I’ve traveled without kids in the past 3 years. My bags were so light without diapers and toys!

I wish you all a festive and fun Christmas full of good food and cheer! Safe travels and stay warm!!

On Monday I flew back to Phoenix to celebrate the holidays with my girlfriends. It had been a LONG 5 months since I’d seen them. It wasn’t until I was packing that I truly realized how much I missed our monthly girls night dinners. We ate, drank and laughed until my stomach hurt. And the hugs I got from my babies when I got home were pretty great too.

Both Lawson and Sybil fell and got banged up this week. Sybil has a pretty good scrape on her chin and Lawson has a fat lip. It’s hard to see your little ones injured, even if it is relatively minor.

We had a holiday party last week that called for festive attire. I have a few dresses but none I feel comfortable in this time of year. That afternoon I raced out to find something other than distressed jeans and found this pair of black denim at Madewell. I’ve already worn them 4 times. They suck you in in all the right places and don’t seem to stretch out between washings.

The Crown. Have you seen it? I started season 1 last week and am obsessed. It’s one of those series that I want to binge, but also don’t want it to be over. I enjoy the history and the acting is top notch. Season 2 just came out on Netflix.

You Are a Badass. It’s a self help book that doesn’t feel particularly so. The chapters are short which makes it easy to digest. I’m halfway through and have already started to put better vibes out into the Universe. ;) 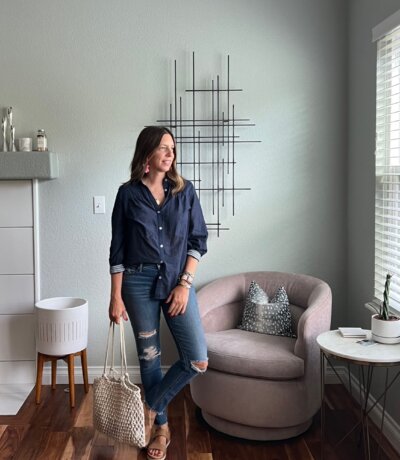 What I Bought in June